Happy New Year everyone!  What did you do?

I redecorated my aquarium and terrarium…

(The dome in there to right is to protect some tropical seedlings I’m getting started in there).

…and then Jeb and I went to the Seattle Center where a big dance was being held in the Center House. 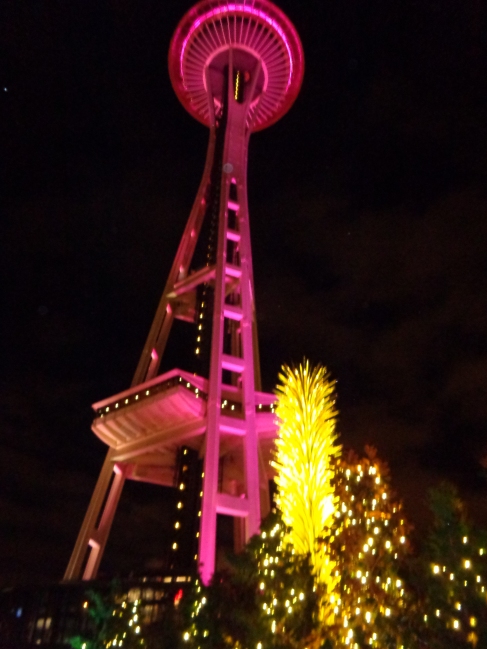 Inside the Center House, the toy train village was set up: 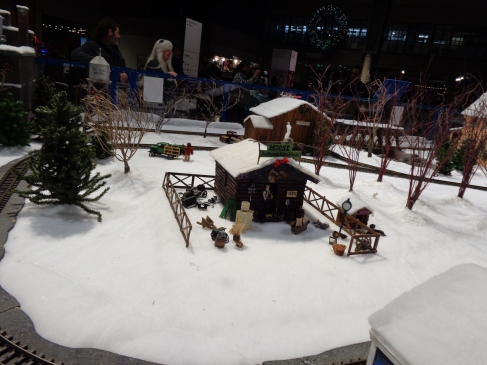 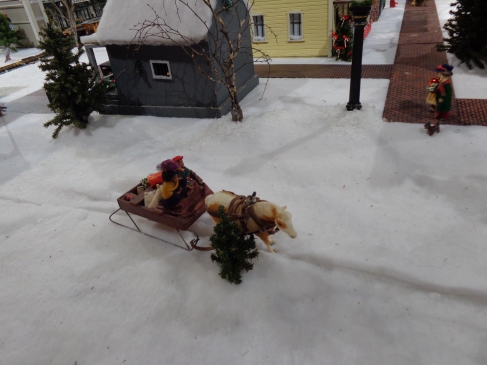 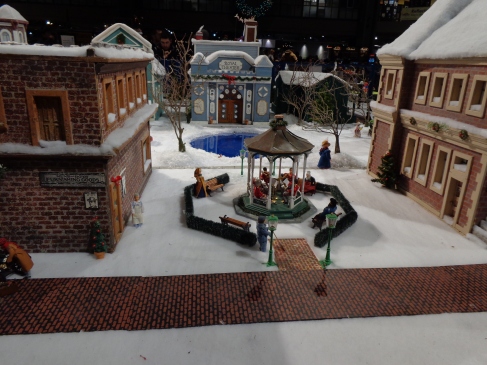 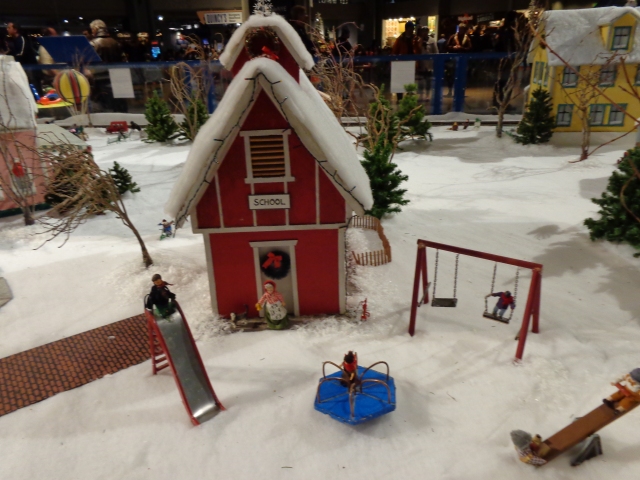 Yes, I do love toy train villages.  I used to have one as a kid that was about the size of a shallow coffin in its plywood box that I kept under my bed.  I made mountains and tunnels and planted fake little forests and gardens amid the tiny houses, shops, people, and cars I collected to go with the train.   When I was 19 and went on my very first plane ride ever, I looked down at the ground far below in great excitement and it was like looking down on my  own little train set.  This could be why I have the occasional strange dreams about cities in boxes, LOL.

Anyway, the huge dance floor in the Center House is surrounded by food vendors and table, which has, in the past, with politer more intelligent crowds, allowed plenty of room both to sit and dance when the band came on.

They were called The Nines due not only to their spiffy dress, but also to the fact that there are 9 singers among them.  They had a huge musical range as a result of this, covering songs popular as far back as the 60s all the way up to present, though with a definite proclivity for the 80s, which is good.

We had some fun dancing before it got too crowded on the dance floor and got our picture taken, albeit vaguely, by Marcus Yam of the Seattle Times:

I’m the one in the red dress with the long hair and flower and you can sort of see Jeb’s face there in front of me.  Don’t you just love the way the guy in the center of the picture is dressed?

I got a few colorful pictures of the crowd as well, people doing fun things with the pink glow sticks and crowns T-Mobile was passing out: 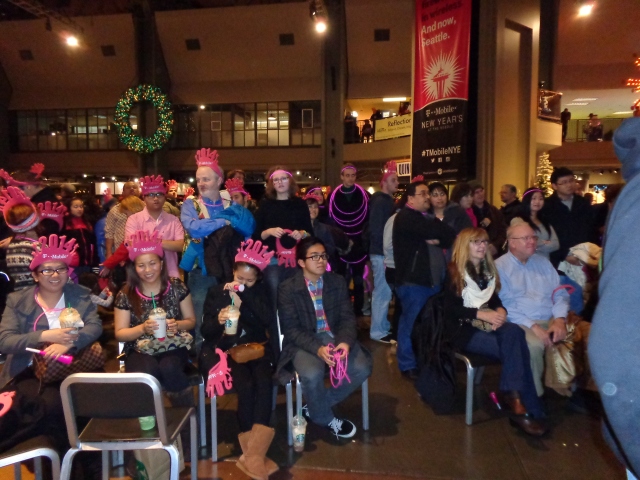 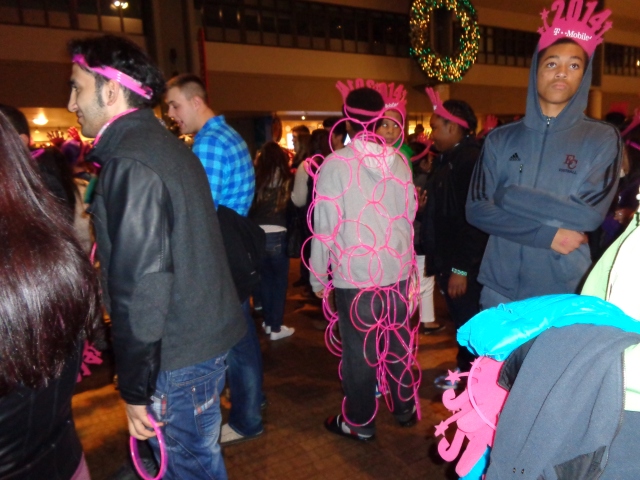 At one point, The Nines brought a little boy onstage and handed him the microphone.  It looked like they were just going to have fun, getting a kid to say something cute or the like, but no.  They brought him up there to sing and sing he did, WONDERFULLY, like Michael Jackson did as a kid.  He was that good!

It was a fun evening, but Seattle intelligence quotient has none the less hit rock bottom in my estimation.  See all these people?  They were NOT what I’d call either a polite or intelligent crowd. 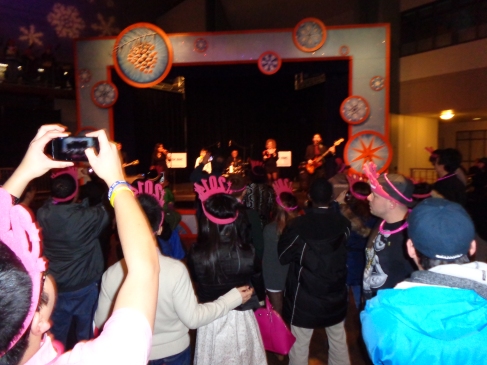 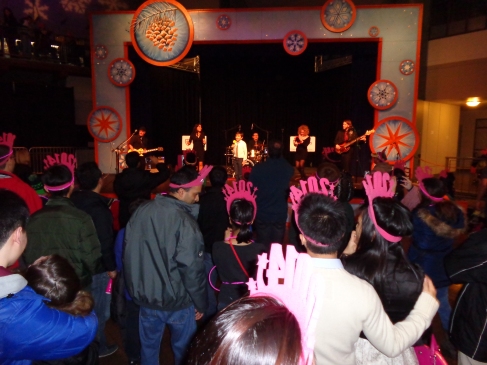 They are standing ON the dance floor like moronic bumps on a log doing nothing but crowding it with their mostly motionless and fairly brainless bodies.  What was WRONG with them!  Were they just a special brand of stupid to do such a thing?

At least the kids, from toddlers up to teens knew what to do: they danced.  But the adults with them did that whole stupid bumps on logs like thing.  Or maybe it was the zombie apocalypse or something.

We danced a set and a half, but then had to leave because the dance floor was getting more and more crowded with stupid people just standing there and Jeb couldn’t stand it anymore.  I told him to calm down, that we could solve this dilemma just by swing dancing.  That would force them all to step back to where they belonged, but he wouldn’t go for it.  He knows how, but has confidence issues there and a perfectly understandable leeriness of zombie like crowds.

Oh well, it was fun while it lasted.  I got this picture of the EMP with the Space Needle behind it:

We left around 9:30, plenty of time to drive home before any drunks would be hitting the roads, and it was a good thing we did too.  Apparently there was a gun incident after we left.  No one got shot.  Someone just spotted the gun in this guys pocket and the police had him tackled and on the ground before he could do anything with it.  I also heard something about some protestors that began shooting bottle rockets around very indiscriminately having to be subdued before they could hurt anyone and some jerk trying to burn Neighbor’s Night Club out when it was filled with a New Year’s Eve Party.  Apparently, they were just following the typical terrorist format of behavior.  Wish I could understand why.  Despite all that, no one was hurt or killed.  Guardian Angels, it seems, were out in full force and working their little wings off.

Meanwhile, we sat at home eating chocolate while we watched the news run up of 2013 on out big screen until it was time for the fireworks at which time we toasted one another with half frozen sparkling cider and watched this:

Foggy it might have been, but I think it was pretty beautiful.

Uhmm… could someone please tell me the proper way to embed video code here?  I can’t seem to figure it out.

I'm an ex-Pentacostal, ex-Muslim, ecclectic Agnostic with slightly Wiccan leanings. I am not affiliated with any organized religion or political platform, but I do believe in magic and all things wise and wonderful. I work as an admin in a calibration lab. I've published 2 books so far this year: Lost in Foreign Passions: Love and betrayal, passion and loss in the heart of an alien land (a memoir of my time as a Muslimah and living in Iran for a year), written under my previous married name, Debra Kamza, and Dream Lover (a paranormal romance, the tale of witch that summons her favorite character out of a Bewitched spin-off and the actor who plays him as well). I'm constantly writing stories and poems, thoughts and dreams, and quite a few opinions - many of which are not popular but oh well. Bite me. I'm interested in art, animals, the paranormal, and people. I love to dance, all sorts, but have been studying belly dance since 2006 and LOVE it! I love anime too and love dressing up and going to conventions. My writing runs the gummut of historical, science fiction, fantasy, romance, and erotica. Beware: I may not be safe reading for work. Just saying....
View all posts by Ampbreia →
This entry was posted in Architecture, Costumes, Dancing, guns, Holidays, Music, News and politics, Uncategorized and tagged Center House, crowds, New Year 2014, Seattle Center, T-Mobile, The Nines. Bookmark the permalink.